We proudly present our 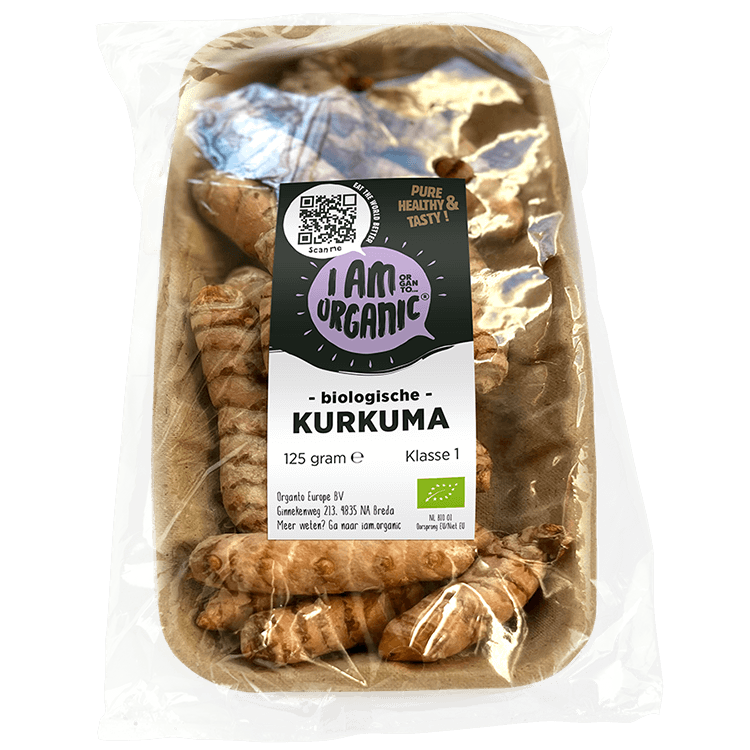 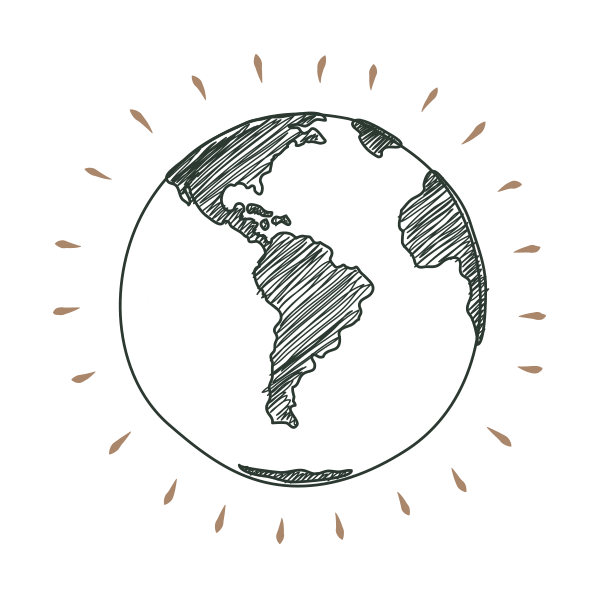 It goes without saying that I AM Organic® prefers to source its organic turmeric as close to home as possible. Because good-quality turmeric is not available year-round in Europe, I come from Peru. From the region of Junín, to be precise, in the central mountains of Peru. And with good reason: the soil quality and climate are optimal for ginger in this region. Although I can be harvested here year-round, I grow in abundance from July to January.

I AM ORGANIC FRUIT AND VEGETABLES ARE NOT ONLY DELICIOUS, BUT ALSO SUSTAINABLE. WE FOCUS ON PEOPLE AND PLANET. BY BUYING I AM ORGANIC PRODUCTS, YOU CAN EAT THE WORLD BETTER. TOGETHER, WE CAN ENSURE THAT WE CAN PASS ON THE EARTH TO FUTURE GENERATIONS IN A BETTER WAY.

Turmeric comes from the rhizome of the turmeric plant. Turmeric is sowed on land with an average slope. It should also be free of possible contaminants, for example, from ‘neighbours’ who use agricultural chemicals. To prevent soil erosion, so-called ‘furrows’, which are grooves or trenches, are made in the soil. These furrows are spaced 40 cm or so apart. Before planting turmeric, holes are poked in the furrows, around 15 to 20 cm deep, in which the seeds are planted. This is usually done in the months of August and September. When sowing, a distance of around 20 cm is kept between the plants. This method gives the roots plenty of space to develop. One month after planting, weeding is done manually or with a machete. If the weeds come back afterwards, they are weeded again a month later. Eight to 10 months after sowing, the turmeric is harvested and stored. A turmeric rhizome weighs on average between 500 grams and 1.5 kilos.

Turmeric is not only very tasty, but also a healthy seasoning! 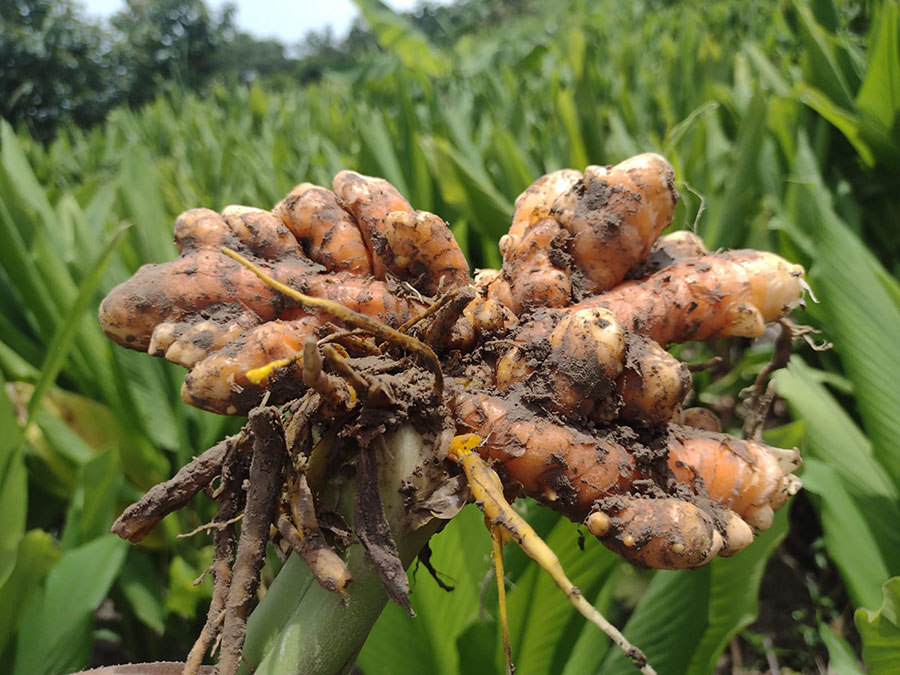 So, here I am. What will you do with me? Will you use me as a spice in a delicious curry? Or will you create a golden milk/turmeric latte? Do you know how best to preserve me to enjoy me for as long as possible? Allow me to inspire you. By choosing me, you will be doing something good for yourself and the world. 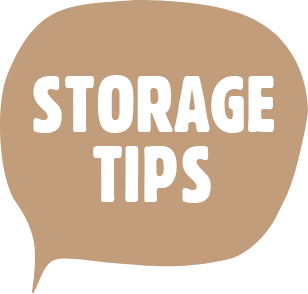 Fresh turmeric is best stored in an airtight container in the fridge. Turmeric will keep for 2 weeks stored like this.

If you want to enjoy me for longer, you can freeze me.

If you want to freeze me, you can finely chop or grate me. In this way, you can take what you need out of the freezer in small portions. If you freeze turmeric roots whole, you can grate what you need from the frozen turmeric and then put the rest back in the freezer. Up to you!

Turmeric can also be dried and ground into powder for longer use. To do so, slice me and leave me to dry in a dry room on kitchen paper for around 4 days. You can pulverise the dried turmeric into powder with a coffee bean or spice grinder. If you store turmeric powder in a sealed jar, away from sunlight and humidity, you will be able to enjoy it for another year or so. 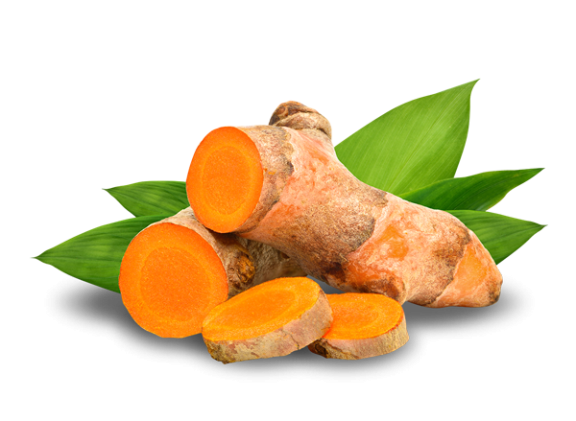 – You can peel turmeric with a potato peeler. You could also use the round side of a spoon or a paring knife.
– Whichever you choose, make sure that you do not cut off too much due to the angular, irregular shape. It would be a shame to waste such good food.
– Watch out! Fresh turmeric really stains and it is extremely difficult to get it off your fingers or out of your clothes!
– The taste of the fresh turmeric root is much stronger than the dried variety.

I am perfect for to flavouring rice or stews and turning them yellow. Below, I AM Organic inspires you to use me to make a delicious turmeric latte. Because of its golden yellow colour, this beverage is also called golden milk. Enjoy! 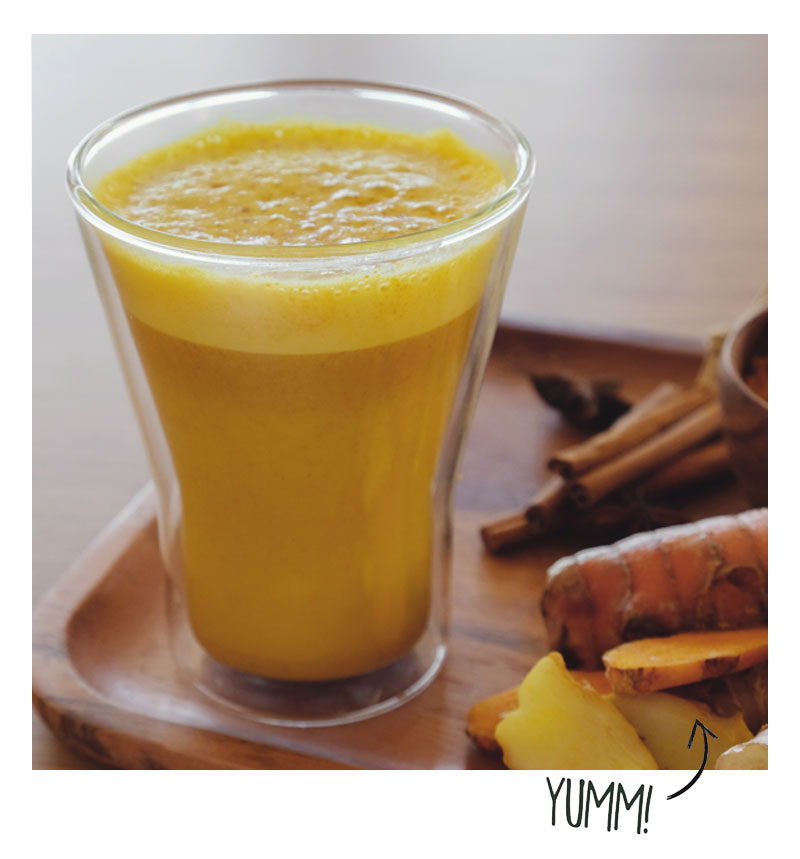 What goes into it

– Put 3/4 of the (almond) milk in a small pan, but do not turn the heat on yet.
– Peel the fresh ginger and turmeric and slice thinly.
– Add the fresh turmeric, ginger, sweetener and cinnamon powder to the almond milk in the pan.
– Heat over medium heat and stir a little, taking care not to let the milk boil.
– As soon as the mixture starts bubbling, remove it from the heat and remove the ginger and turmeric slices.
– Pour the mixture through a sieve in elegant large glasses or mugs.
– Froth the rest of the (plant-based) milk with a whisk or milk frother.
– Pour this foam layer on your turmeric latte and sprinkle with some cinnamon powder. 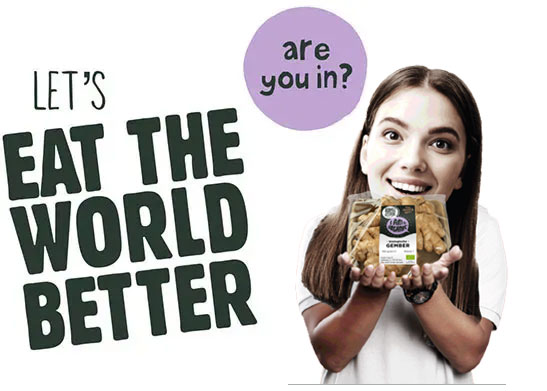 Scroll to top
We use cookies, fruits and vegetables to make your experience on our website better

This website uses cookies to improve your experience while you navigate through the website. Out of these, the cookies that are categorized as necessary are stored on your browser as they are essential for the working of basic functionalities of the website. We also use third-party cookies that help us analyze and understand how you use this website. These cookies will be stored in your browser only with your consent. You also have the option to opt-out of these cookies. But opting out of some of these cookies may affect your browsing experience.
Necessary Always Enabled
Necessary cookies are absolutely essential for the website to function properly. These cookies ensure basic functionalities and security features of the website, anonymously.
Functional
Functional cookies help to perform certain functionalities like sharing the content of the website on social media platforms, collect feedbacks, and other third-party features.
Performance
Performance cookies are used to understand and analyze the key performance indexes of the website which helps in delivering a better user experience for the visitors.
Analytics
Analytical cookies are used to understand how visitors interact with the website. These cookies help provide information on metrics the number of visitors, bounce rate, traffic source, etc.
Advertisement
Advertisement cookies are used to provide visitors with relevant ads and marketing campaigns. These cookies track visitors across websites and collect information to provide customized ads.
Others
Other uncategorized cookies are those that are being analyzed and have not been classified into a category as yet.
SAVE & ACCEPT
Powered by

Choose below who you want to chat with via WhatsApp